A long-lasting battery is a huge quality of life feature in wireless headsets. We wanted to make the 9X battery last as long as possible, and didn't want to settle for anything close to the industry standard.

We didn't just want to make a headset that worked with Xbox and next-gen Xbox consoles; we wanted to make it the best, which meant improving upon some existing problems with other Xbox headsets.

When we set out to make the Arctis 9X, we put a lot of effort into listening to feedback that Xbox gamers had about their current wireless headsets, and we found there was one recurring complaint: most wireless headset batteries drained way too quickly.

For Xbox headsets, a battery life of 6-10 hours had become the standard, and even those numbers came with a lot of fine print, and didn't really hold up in practice.

So, we kept researching. Aside from short battery life, the other complaints that gamers had with existing Xbox Wireless headsets focused on the connection quality. Their feedback included problems with:

Because of this, we knew we couldn't just beef up the battery life and call it a day. An off-the-shelf solution wasn't going to fix all these issues.

Instead, we custom developed the Arctis 9X's chipset to specifically work with the Xbox Wireless tech, so we were able to address both the battery life and connectivity issues that existed in other Xbox headsets. No other wireless headset on the market has done this, so we're extra proud of the results.

What does this mean? 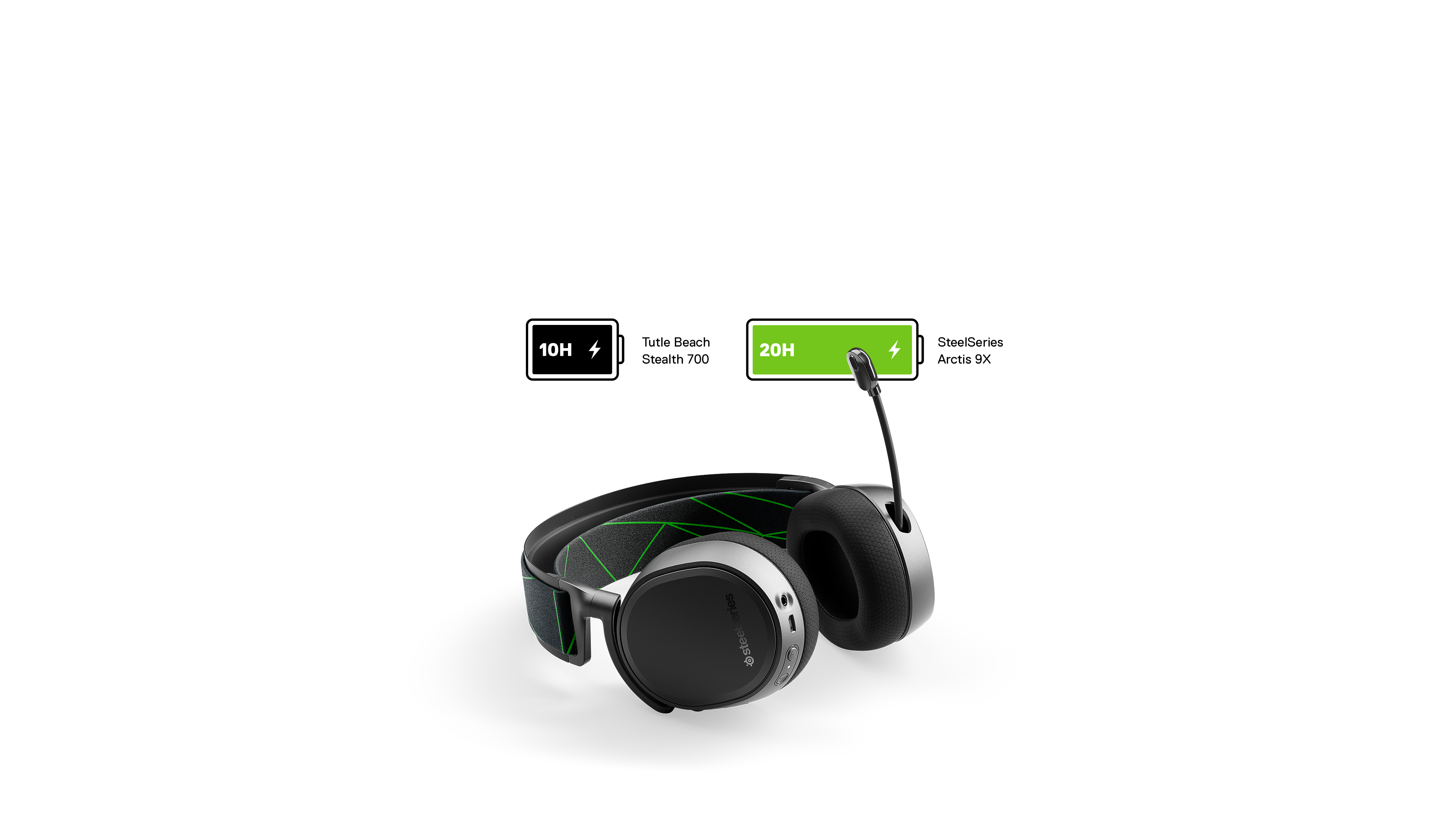 First and foremost, we were able to more than double the battery life by optimizing its chipset to consume significantly less power than its counterparts.

This advanced chipset transmits data to and from the Xbox under even the most rigorous audio conditions.

We ensured that it could last 20 hours (or more) by testing with pink noise at 90db over Bluetooth and Xbox Wireless simultaneously, conditions that would drain other headsets within a few hours.

Building a custom chipset also meant that we could stamp out connectivity issues, meaning no dropped connections, interference, or glitches. It also increased the wireless range, so you can grab a drink without ever missing a beat.

Since we worked with Microsoft from the ground up to integrate Xbox Wireless with the Arctis 9X, we're thrilled to have created an audio experience as flawless as using an Xbox controller for Xbox One, Xbox Series X, and Xbox Series S.

The SteelSeries Arctis 7X wireless gaming headset for Xbox is designed for Xbox Series X|S with backwards compatibility for Xbox One and has long-lasting 24 hour battery life.

The Arctis 1 Wireless for Xbox uses first-of-its-kind USB-C technology to connect to Xbox, Nintendo Switch, Android and PC, to provide unmatched connectivity across all gaming platforms.